Victories in Chile, Ecuador, and Russia

June 13, 2007 Dear Friends, We are celebrating exciting victories by ELAW partners in Chile, Ecuador, and Russia! 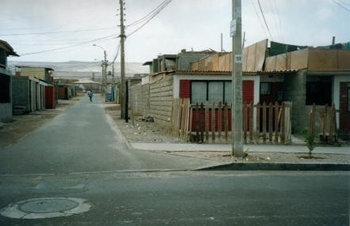 A home in Arica, Chile, near the original dump site.

In the port town of Arica, Chile, 356 residents of a low-income neighborhood are finally seeing justice – they will be compensated because they have suffered health problems from exposure to an illegal toxic waste dump. In Ecuador, government authorities are calling for a halt to the Baba Dam, part of an ill-conceived hydropower project at the confluence of the Baba and Toachi rivers, halfway between Quito and Guayaquil. In Russia, the Republic of Buryatia`s Supreme Court ruled that an oil pipeline being built across Siberia should be rerouted away from Lake Baikal, the deepest and oldest lake in the world. Find more information below about these inspired victories and ELAW’s collaboration with the world’s leading grassroots advocates. Thank you for your interest! Sincerely, Bern Johnson Executive Director Chile awards compensation to community contaminated by toxic waste In Chile, the Supreme Court ordered financial compensation for 356 residents of Cerro Chuno, a low-income neighborhood contaminated by toxic heavy metals. Residents were unaware of the dangers posed by abandoned mining wastes, left in piles where children played. ELAW partners at Fiscalia del Medio Ambiente (FIMA) worked for 10 years to win justice for the community of Cerro Chuno. Fernando Dougnac, President of FIMA sent thanks to ELAW scientist Meche Lu: “Your testimony was mentioned in the court decision and was one of the key pieces of this decision . . . it is so great to win, particularly when the court decision brings justice to the dispossessed.” More than 20 years ago, a Chilean company imported 21,000 tons of toxic mining wastes to the city of Arica. Arica is one of the driest inhabited places on earth. Wind spread toxic dusts from the waste piles, which were later abandoned. In a classic example of environmental injustice, a low-income housing project was built next to the piles of waste! In 1998 the waste was removed and dumped in a nearby ravine, with no further clean up. At FIMA’s request, ELAW scientist Meche Lu traveled to Arica and collected soil samples from the affected neighborhood for analysis at a laboratory in Oregon. The samples were found to contain lead, arsenic, and cadmium far above those considered safe for urban areas. Meche returned to Arica with FIMA attorney Francisco Ferrada to testify in court about the results of the soil analysis. She informed the court about the continuing health risks of contamination in the affected neighborhoods. For more than a decade, children in Cerro Chuno have suffered from learning disabilities and neurological disorders caused by lead poisoning. In a historic ruling, each of the affected residents will receive $16,000 from the municipal health service. This is the first time a Chilean court has required the government to pay for failing to protect citizens from injuries caused by environmental contamination. For more information: The Santiago Times Chile Must Pay $5.4 Million to Aricans Living Amid Toxic Waste Authorities in Ecuador want hydropower project halted Authorities in Ecuador are calling for a halt to the Baba Dam. This hydropower project would limit access to freshwater for farming communities downstream, threaten wildlife, and increase the risk of malaria and other public health problems. The dam is being built with support from the Inter-American Development Bank, at the confluence of the Baba and Toachi rivers, halfway between Quito and Guayaquil. Responding to a request from partners in Ecuador, ELAW scientist Meche Lu reviewed the project’s environmental impact assessment (EIA) and found many flaws. Meche’s critique is cited on the Government of Ecuador web site. El Comercio, one of Ecuador’s leading newspapers, says ELAW’s critique was instrumental in the Ministry of Energy’s call for a halt to the project. ELAW congratulates its partners at Corporacion de Gestion y Derecho Ambiental (ECOLEX) for their inspired work and stands ready to help as they continue to challenge this short-sighted project. For more information: El Comercio Government of Ecuador Oil pipeline must steer clear of Russia’s Lake Baikal The High Court of Buryatia ruled that the trans-Siberian pipeline must be rerouted to protect Lake Baikal. President Putin voiced his objection to the pipeline route last year and last week’s ruling will ensure the lake is protected. ELAW congratulates its partners in Russia for their work protecting Lake Baikal, the deepest and largest lake in the world. ELAW Staff Scientist Mark Chernaik helped advocates at Ecojuris challenge plans to build this oil pipeline near Lake Baikal. For more information: Russian news agency Ekho Moskvy Russian Court Rules Siberian Pipeline Route Unlawful