San Ignacio, Belize -- August 17, 2009 -- The water being released from the Chalillo Dam is unfit for human consumption and cannot be properly disinfected due to the high levels of turbidity, according to Professor Guy Lanza of the University of Massachusetts, Amherst.  After almost three weeks of believing the rains and the runoff from the Mountain Pine Ridge were causing the Macal River to look worse than anyone can recall, we now know that the source is the intentional release of accumulated sediment and silt from the bottom of the reservoir. 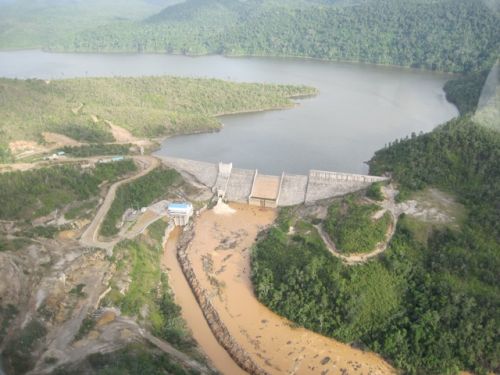 The Belize Institute of Environmental Law and Policy (BELPO) sent the photos of the discolored water to its international network of scientists for review.  After reviewing the photographs, Dr.  Lanza, who is a water quality expert with 35 years of experience in analyzing dam impacts and water pollution problems, stated "The recent release of sediments with severe turbidity contaminants from the Chalillo dam is inexcusable and poses immediate risks to human health, livestock health, and the ecology of the Macal, Mopan, and Belize rivers.  Immediate action is required to halt the release of additional sediments from the Chalillo dam, and to quickly respond with appropriate remediation strategies to reduce the threats to humans, livestock, and the Macal, Mopan and Belize river ecosystems."

"The water in that river is unfit for human consumption and simply cannot be filtered and disinfected due to the high turbidity levels." added Dr.  Lanza.  "The extremely high water turbidity, clearly documented in the photographs, is the result of both organic and inorganic sediment material including silts and clays deliberately released from the dam gates to the Macal River.  The clay material will remain in the water for an extended period.  "The release is a concern with regard to use of the water for drinking by humans and livestock and also a major concern to the overall water quality and ecology in both the impoundment and downstream in the Macal, Mopan, and Belize rivers.  The turbidity levels considered safe for drinking water are given in Nephelometric Turbidity Units (NTU's).  NTU's are a standard measure of light transmission through water and the U.S.  Environmental Protection Act acceptable level is 1 NTU; the World Health Organization (WHO) level is 5 NTU's.  The levels of turbidity in Macal River are thousands of times higher than acceptable WHO standards.

"Turbidity contaminants protect disease-causing waterborne microbes (bacteria, viruses, protozoa) by masking their presence and by interfering with the effectiveness of the disinfection chemicals (e.g.  chlorine) used to purify the water for drinking purposes.  Sediment materials producing the turbidity will clog filtration systems used to pre-treat drinking water before using chlorine (or other disinfectants) to inactivate pathogens.  Clogging can occur in engineered sand filters at water treatment plants or in the "natural filtration processes" in soil and subsurface rock.  "It's not possible to filter and disinfect drinking water with the excessively high levels of turbidity evident in the Macal, Mopan, and Belize rivers.  A good historical example of excess turbidity causing serious human waterborne disease from drinking water was reported in 1993 in Wisconsin (near Milwaukee).  More than 400,000 people became ill with waterborne disease from a protozoan parasite (= cryptosporidium) and more than 100 died.

"Toxic elements including heavy metals, pesticides, and generally non-toxic elements such as iron can have their toxicity increased in turbid water because they are often absorbed or adsorbed to fine clay Excess accumulation of iron can lead to disturbances in liver function, diabetes mellitus, endocrine disturbances and cardiovascular effects.

"High turbidity will block light entering the impoundment and rivers and that will in turn reduce the normal addition of oxygen to the water by photosynthetic plants, algae, and bacteria.  Also, some of the dissolved and suspended organic material contributing to the turbidity will at the same time remove oxygen from the water through the processes of Biochemical Oxygen Demand and Chemical Oxygen Demand (BOD/COD).  "Lower oxygen content will result in the loss of fish and other important aquatic biota and can prolong the survival of disease causing microorganisms.  Another concern is the abrasive effect of suspended materials on fish and other living creatures (a sort of wet sandblasting).  The fact is sediments will clog the bottom habitat essential for the reproduction and survival of many important bottom dwelling organisms."