When people talk about Cancún, Mexico, high-rise hotels along pristine white-sand beaches and college students on spring break come to mind. It’s easy to forget that the Yucatán Peninsula is a unique landscape — with underwater caves that hold crystalline waterways, the country’s largest tropical forest, and just offshore in the Caribbean Sea, the Mesoamerican Reef with its exotic corals and colorful aquatic life.

On a peninsula the size of Rhode Island, the 10 million tourists who visit annually may be loving it to death. Still, the Yucatán has lovely little enclaves, like Puerto Morelos, a village with a small working fishing port and famous lighthouse that draws visitors who crave a local experience.

But even this small haven came under threat when a Chinese firm sought to create a 1,400-acre mega-mall, one of the largest in the western hemisphere.

In 2012, initial work on the mall destroyed hundreds of acres of wetlands, mangroves, and other protected areas near Puerto Morelos. What’s more, its small port was threatened with massive expansion to accommodate the container ships slated to bring in the Chinese goods.

But Alejandra Serrano, a lawyer with the Centro Mexicano de Derecho Ambiental and a longtime ELAW partner, filed suit against the project, arguing that the lack of public participation in the environmental impact assessment (EIA) and planning process violated Mexico’s laws.

A review of the assessment by ELAW Staff Scientist Meche Lu showed the EIA lacked essential information, including details about the location of coastal wetlands within the project area and the impact of paving on the water quality of these wetlands.

Alejandra’s efforts led the Mexican government to halt the project and fine project developers close to US $1.5 million for building roads without proper permits.

Like many ELAW partners, Alejandra’s work put her at personal risk. Her car tires were deflated during a meeting, her home invaded, her digital security compromised, and she was almost run off the road by another car.

But her efforts eventually paid off. In spring 2017, the Chinese mall project was permanently canceled when the company abandoned the project.

In Guadalajara, the Instituto de Derecho Ambiental (IDEA) has been a fierce advocate for the environment, halting a massive dam project on Lake Chapala, the state’s largest freshwater lake. Those efforts also proved dangerous for IDEA advocates. Staff attorney Eduardo Mosqueda Sánchez was imprisoned without charges for 10 months, simply because he was with protesters drawing attention to a land dispute between indigenous people and an iron mining company in Jalisco State.

Eduardo is free now, once again joining many Mexican colleagues collaborating with ELAW to chart a greener future for Mexico. 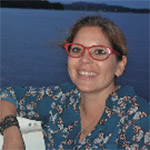